Biodiesel production typically starts with oil-rich energy crops such as soybean, palm or rapeseed, which are harvested and then converted into fatty acids for use as fuel. The cost of expanding oilseed crop production is a limiting factor in allowing biodiesel to compete with fossil fuel sources. 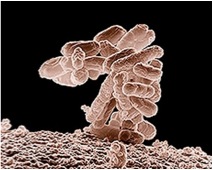 One alternative to using oilseed crops that many bioenergy researchers are exploring is to synthesize the fatty acids that are converted into biodiesel in bacteria. This method bypasses several steps used in producing biodiesel from plants including purification, which would reduce production costs and raise final yields.

In the November 2011 issue of Applied and Environmental Microbiology, a team of researchers including DOE JGI’s Parwez Nawabi, Thanos Lykidis and Nikos Kyrpides describe a process of engineering bacteria with the help of a novel fatty acid enzyme to produce biodiesel. The enzyme was identified and characterized from several bacterial sequences. They inserted the enzyme into the model microbe E. coli to prove that it was involved in fatty acids synthesis. E. coli is the bacterium of choice for many biodiesel researchers because it grows much faster than yeast and many other microbes and can serve as a factory for synthesizing a multitude of products.

“The work described in this report provides an alternative route for the synthesis of biofuel molecules,” wrote the researchers. “The pathway described here is a first step in the generation of [biodiesel] and, with further optimization, may lead to the production of a cost-efficient next-generation biofuel.”