Our Science
Home › Science Highlights › Another Brown Mercury Producer Genome Sequenced
In the August edition of The Journal of Bacteriology, a group of scientists including several DOE JGI researchers and longtime collaborator Judy Wall of the University of Missouri described the genome for Desulfovibrio africanus, a sulfate-reducing bacterium isolated from Namibia that doesn’t require oxygen for its survival. Like the Desulfovibrio species sequenced as recently as this year but dating back to 2006, the bacterium is able to produce brown (methyl) mercury, a human neurotoxin that also contaminates terrestrial and aquatic ecosystems. 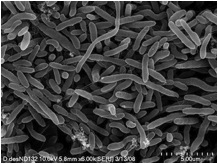 A bacterium called Desulfovibrio desulfuricans strain ND132 can transform elemental mercury into methylmercury, a human neurotoxin (Courtesy of Oak Ridge National Laboratory)
In addition to its ability to produce serious contaminants, the financial and environmental motivation for characterizing D. africanus derives from the abilities of sulfate-reducing bacteria to corrode underground iron or steel gas and water pipes, and generate noxious sulfide during digestion of domestic and agricultural wastes.
Desulfovibrio bacteria have had an especially detrimental effect on the petroleum industry both because of their corrosive action and because of the souring of petroleum (containing excess sulfur impurities) when it comes into contact with hydrogen sulfide.
This paper presents the analysis of the 4.2 million nucleotide genome sequence to provide further insight sulfate-reducing bacteria such as D. africanus can convert inorganic mercury into a more toxic compound.