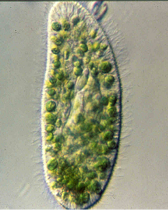 Green algae are key components of the global carbon cycle and help sequester half of the carbon in the atmosphere. From a bioenergy perspective, algae are increasingly viewed as a viable feedstock for biofuel and biodiesel production because of their high lipid content. However, algal viruses can infect up to a fifth of all algae at any one time and impact their productivity.

“Like other microalgae, there is an increasing interest in using Chlorella in a variety of biotechnological applications,” wrote the team in the study published in advance online September 21, 2010 in The Plant Cell. “The sequence of the NC64A genome will help in the optimization of these various processes.”

The 46-million base genome, sequenced using the whole genome shotgun Sanger approach, revealed that the alga, long thought to be asexual, might engage in sexual reproduction after all. Another interesting finding involves Chlorella’s rigid cell walls, which are built with chitin, the same material used by crustaceans for their hard exoskeletons, and might have come from “the capture of metabolic genes by horizontal gene transfer from either algal viruses, prokaryotes or fungi.”