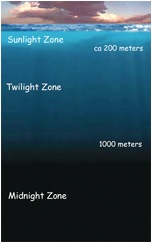 Through single cell genomics, novel bacteria in the dark ocean that may help explain the carbon budget of the oceans were identified. (Image from the VERTIGO experiment on lbl.gov)

The oceans cover more than half of the planet’s surface, and as such play an important role in the global carbon cycle, trapping 50 times more carbon than the atmosphere. However, the process by which carbon fixation takes place deep underwater where the sunlight does not penetrate has not yet been fully explained.
In the September 2 issue of Science, DOE JGI collaborators from the Bigelow Laboratory for Ocean Sciences teamed up with DOE JGI single cell researchers led by Microbial Genomics Program lead Tanja Woyke to identify bacteria in the “twilight zone” — the region of the ocean that lies between 200 meters and 1,000 meters underwater — that are involved in capturing carbon.
“Previous oceanographic models suggested that Archaea do not adequately account for the amount of carbon that is being fixed in the dark ocean,” said study senior author and DOE JGI collaborator Ramunas Stepanauskas. “Our study discovered specific types of Bacteria rather than Archaea, and their likely energy sources that may be responsible for this major, unaccounted component of the dark ocean carbon cycle.”
Stepanauskas and his colleagues employed single cell genomics techniques to isolate and identify the microbes from water samples collected in the waters of South Atlantic and North Pacific. “These previously unrecognized metabolic types of dark ocean bacteria may play an important role in global biogeochemical cycles, and their activities may in part reconcile current discrepancies in the dark ocean’s carbon budget,” they wrote.